Make the Regional Center a live/work/play destination centered on the Longhorn Quarry Development.

The Longhorn Quarry in the NE I-35 and Loop 410 Area Regional Center is an emerging destination due to its major sports, entertainment, and accessibility-focused attractions. However, the surrounding area lacks the amenities and services that support sustained and large-scale visitation. Additional retail, entertainment, food and beverage, hospitality, and housing can help to create a multi-faceted Regional Center for a variety of visitors and users. To continue the growth of visitation to the Longhorn Quarry and surrounding areas within the Regional Center, additional destinations and attractions are needed to generate more frequent and varied trips to the area. The appeal, services, and amenities in the area for people with disabilities is significant and presents the opportunity to grow the Regional Center as a destination for health care, research, and entertainment for people with disabilities.

Invest in and support revitalization of the existing commercial and industrial areas within the Regional Center.

The strength of the plan area as an industrial and logistics center should be supported and promoted. Efforts are needed to facilitate reinvestment and increase employment activity in existing industrial areas focusing on small-scale manufacturing, local distribution, and show-rooming/design services. The retail areas in the Regional Center do not have the same market strength as the industrial uses and have been impacted greatly by the newer retail developments along I-35. Reinvestment in and redevelopment of aging retail areas into mixed-use centers is needed to reposition them and attract investment and new businesses. A particular focus is needed on increasing access and availability of grocery stores, healthy foods, and everyday retail goods and services for area residents.

Proactively work to mitigate impacts of planned and future transportation improvements and improve access to and visibility of Regional Center businesses.

The planned expansion and double-decking of I-35 through the NE I-35 and Loop 410 area will affect access to and visibility of the Regional Center's employment areas. Proactive efforts are needed to mitigate impacts and guide plans to maintain, enhance, where possible, access and visibility.

The NE I-35 and Loop 410 Area Regional Center had 18,600 jobs in 2018 and is forecast to grow by 8,200 jobs by 2040. Employment is generally evenly distributed between medium- and high-wage jobs, with about 40% of the workforce earning between $15,000 and $40,000 per year and about 40% of the workforce earning more than $40,000 per year. The percentage of the workforce earning mid-to-high wage salaries is slightly higher in the Regional Center than in San Antonio as a whole. Unlike other employment hubs in San Antonio, jobs in the NE I-35 and Loop 410 area are not tied to a dominant major employer; rather, multiple employers create the large job base.

Economic activity in the Regional Center has been heavily influenced by its connectivity to several locally and regionally significant transportation corridors. Easy access to I-35, Loop 410, and the Wurzbach Parkway has made the NE I-35 and Loop 410 area one of the most active in the San Antonio region for the trade, transportation, and staging of goods and freight. Almost 20% of the Regional Center’s jobs are within the Transportation and Warehousing employment sector.

While distribution and industrial activities will continue to be an important part of the Regional Center’s economy, the area is also an emerging sports, recreation, and entertainment destination. Within the past ten years, the Regional Center has become home to Toyota Field, Morgan’s Wonderland (the world’s first amusement park specifically designed for those with disabilities), the Northeast Independent School District’s Heroes Stadium, and the South Texas Area Regional Soccer Center. These sports and entertainment destinations are located within the Longhorn Quarry and are part of a larger Master Development Plan (MDP) for redevelopment and adaptive reuse of the former quarry site. The MDP calls for a mix of retail, commercial, and residential development and presents an opportunity for additional economic growth in the Regional Center. Outside of the Longhorn Quarry, a new School of Science and Technology campus opened near Weidner Road and I-35 in 2020. A new multi-family development is also planned in this vicinity.

Although the Regional Center’s location makes it an attractive commercial hub, much of its current retail and office space is older and less desirable as housing growth to the north of the plan area has driven the development of newer, more competitive commercial areas further northeast along I-35. The office vacancy rate in the Regional Center hovers at around 21%, which is more than double the 9% vacancy rate for the County. The retail vacancy rate in the plan area is about 9%, which is also higher than the County average of about 4%.

In recent years, there has been a focus on economic development and reinvestment in the NE I-35 and Loop 410 area. A Tax Increment Reinvestment Zone (TIRZ), federally designated Opportunity Zones, and a commercial property enhancement grant program are financial tools available within the Regional Center to assist with reinvestment efforts.

The NE I-35 and Loop 410 Area Regional Center Planning Team assessed the plan area’s strengths, weaknesses, opportunities, and challenges over two Planning Team meetings devoted to economic development. Highlighted among the Regional Center’s assets are its location within the region, access to major transportation routes, diversity of the employment base, and unique mix of anchor businesses and institutions such as the entertainment venues at Longhorn Quarry, Children’s Rehabilitation Institute TeletonUSA, the Animal Defense League, and the Capitol Aggregates cement facility.

Despite a number strengths and promising new developments, the plan area does face some challenges to its economic growth:

The NE I-35 and Loop 410 Area Regional Center has many of the attributes of a vibrant economic place as well as opportunities to build upon existing assets: 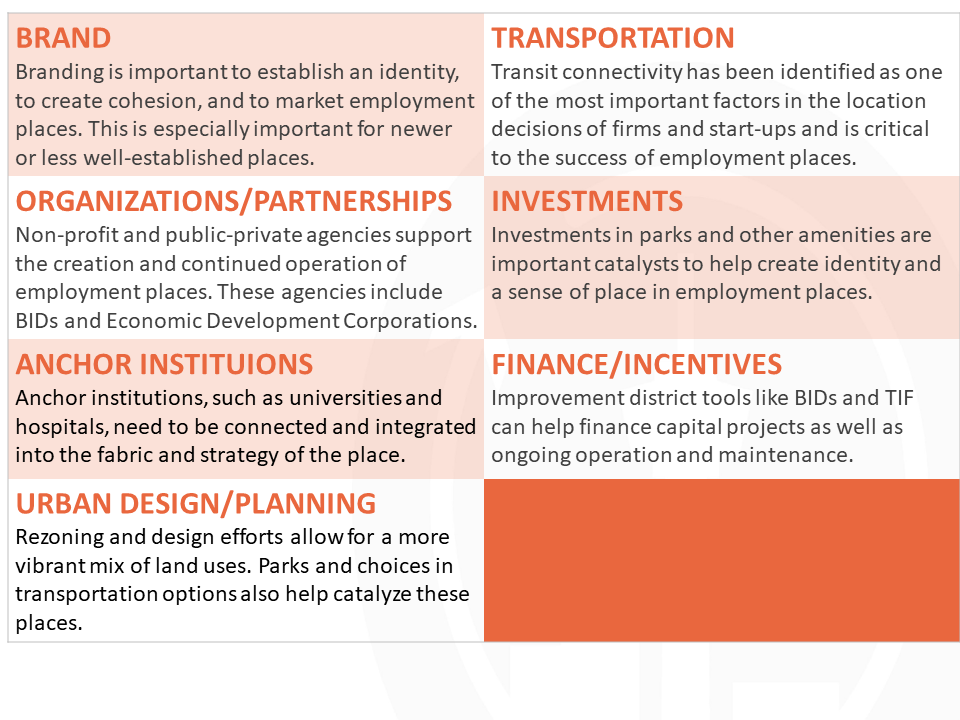